Aeolian sedimentary systems of the Canary Islands are enclaves of particular interest due to three main factors: i) they are located at hot spot volcanic islands, which determines that their sediments come, mostly, from organic calcareous deposits, confined at the island platforms, instead of terrigenous contributions, as usually happens at the continental dune systems. Therefore most of these systems are located at the oldest islands, due to their platforms, capable of accommodating sandy deposits; ii) the aridity of the island coasts determines biorhexistasy environments, and thus high mobility rates of sandy sediments, occurring free dune fields, nearest in terms of morphologies and dynamic, to those arid inland dunes systems, instead of coastal dunes fields of temperate regions, and so more fragile; iii) thirdly, these spaces have been one key to the economic development of the islands, relied heavily on mass tourism, based on sun and beach, which develops throughout the year. The touristic resorts and infrastructures that have developed around these spaces, together with the activities carried out by users, have significantly conditioned the natural processes that occur in these systems, reaching profoundly alter some of them. One of the most fragile subsystem, and yet more altered is the foredune, characterized by constitute a ecotope between the beaches and the dunes fields, that functions as a barrier to the marine erosional process and at the same time, as sediment storage in deficit situations. These coastal dunes, in the Canary Islands and around (from southern Morocco to northern Senegal and the Cape Verde Islands), present dunes mound, generated by the interaction of shrubby isolated individuals, mainly from the Traganum moquinii species, with aeolian sedimentary dynamics. In this arrangement, compared with continuous plant presenting at the foredunes of temperate or tropical systems, derives its fragility. The results of four projects of R+D+i (innovation) developed in the last twelve years by the research team that presents this proposal (REN2003-05947, SEJ2007-64959, CSO2010-18150 and CSO2013-43256R), together with those from other R&D contracts and academic papers (mainly doctoral theses), show how human activity has conditioned some natural processes directly in the main systems of beaches and dunes of the Canary Islands. Such is the case of the dune field of Maspalomas (Gran Canaria), where this project tryes to carry out measures to regenerate its foredune, based precisely on recommendations derived from these research. Focus is also placed, in this project, on the beach-dune of Corralejo (in Fuerteventura), in order to know its natural functioning and the interactions produced, in these processes, by human activities. Finally, this project aims to address the characterization of natural and anthropogenic processes and their interactions resulting in the beach-dune system of La Graciosa. It is, in this case, a particular system, what has been termed as "Macaronesian aeolian mantle". 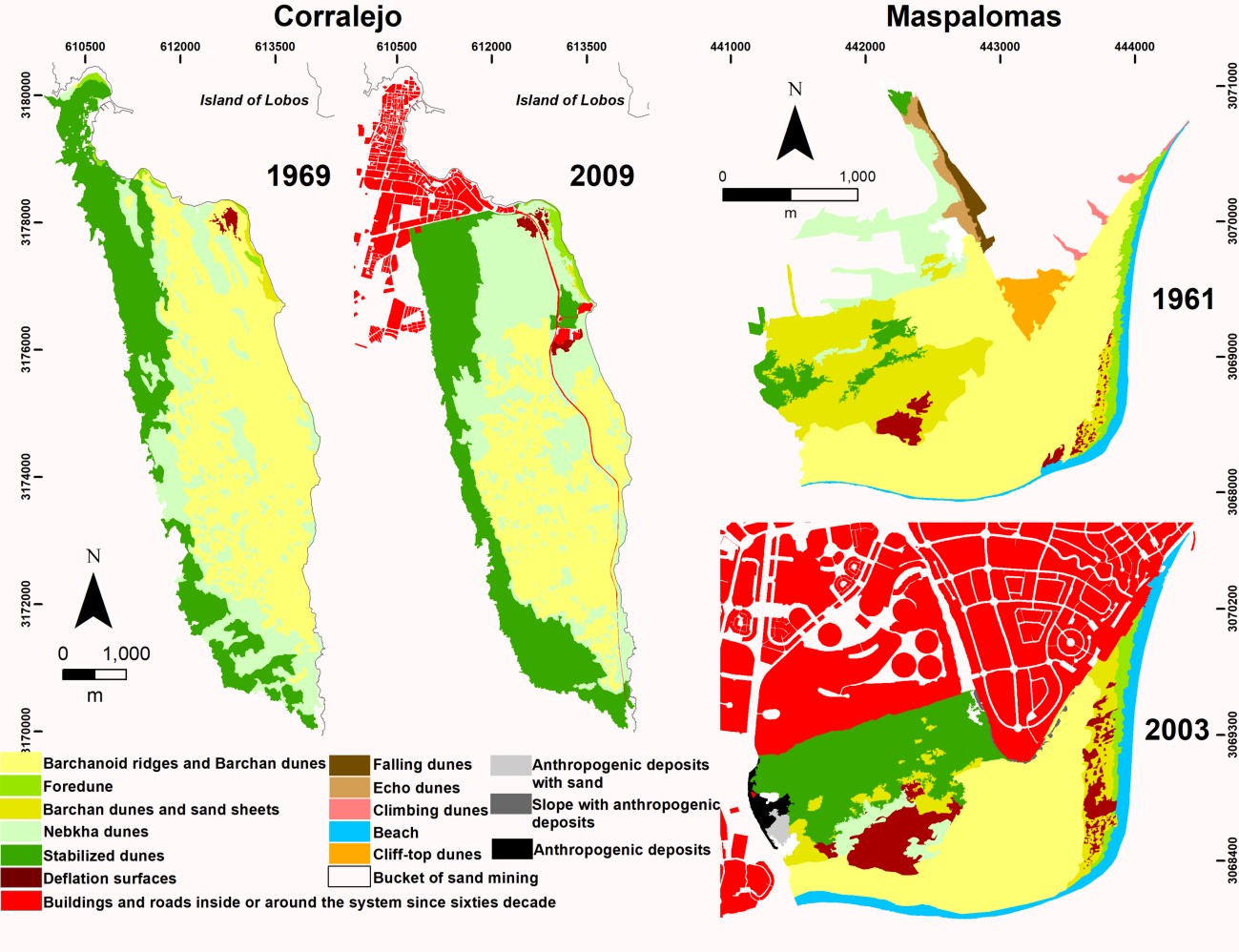