ATOPFe: Effects of ocean acidification, temperature and organic matter on Fe(II) persistence in the Atlantic Ocean

The ATOPFe Project will study the effects of pH, temperature, and organic matter (TOC) on Fe (II) oxidation kinetics and its persistence in the ocean. Three specific regions: polar, subtropical and submarine volcanic regions, have been selected as the fundamental basis for comparing laboratory studies and developing a kinetic model for iron in the context of ocean acidification and warming.

Iron is a trace element essential for the development of organisms and has a great impact on the Carbon cycle through its effect on planktonic communities and their productivity. Reduced iron, Fe(II), is the bioavailable species for phytoplankton, rather than oxidized iron, Fe(III). Fe(III) presents a low solubility and is mostly complexed by organic ligands. Fe(II) is thermodynamically unstable due to pH, O2 and temperature conditions in the medium and tends to become oxidised. Acidification favours the presence of Fe(II) in the medium. Moreover, organic matter plays an essential role in the Fe cycle in the ocean. The presence of organic compounds may reduce Fe(III) to Fe(II) and also stabilise Fe(II) by complexation.

The main goal of the EACFe project is to investigate which compounds and mechanisms determine the presence of Fe(II) in the marine environment and how the presence of organic matter, ocean acidification and global warming affect them.

To achieve these goals, the studies that will be carried out in the three selected regions will be combined with laboratory studies to provide the response from a theoretical marine physical-chemistry perspective of those mechanisms that control the behavior of Fe (II) and explain how it may persist as such in the ocean.

The objectives of the ATOPFe project are:
1. To study the oxidation kinetics of Fe (II) (k-Fe (II) in the text) to describe its persistence in the water masses found in different regions of the Atlantic Ocean: submarine volcanic, polar and subtropical regions.
2. To study the chemical behavior of Fe (II) in volcanic environments by carrying out kinetic laboratory studies considering the ionic interaction that can occur with other components emitted by the volcano and that will affect Fe (II) speciation.
3. To study the interaction of Fe-Cu-phytoplankton by focusing on the determination of organic compounds excreted as a consequence of the Fe-Cu interaction and on the effect of assimilation by phytoplankton.
4. Modeling of Fe (II).

By justifying the presence of Fe(II) in the marine environment, these studies will shed light, from a theoretical point of view, on the results found in other projects related to the studies of mesocosmos, ocean fertilization and iron emissions in hydrothermal zones. 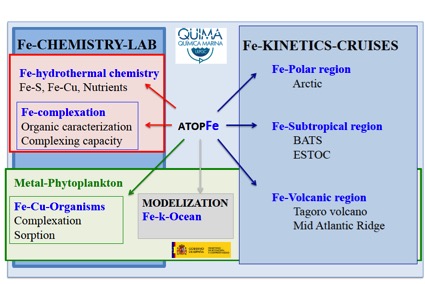