BOUNDARY: Contribution from the Eastern boundary currents to the temporary variability of the AMOC

The Atlantic meridional overturning circulation (AMOC) is recognized as an important component of the climate system. At the decadal scales, the variability of the AMOC is mostly attributed to the western boundary of the North Atlantic Subtropical Gyre (NASG). Two vigorous, deep-reaching currents flow along the western boundary of the NASG, the Gulf Stream and the Deep Western Boundary Current. Due to this impact, hydrographic sections haven carried out historically along 66°W and 52°W, in 1997, 2003 and 2012. These sections, which crossed the Gulf Stream and Deep Western Boundary Current, have not been analyzed so far, and will permit us to estimate the decadal variability of both currents, its relation with the AMOC and the northward heat flux. Due to the importance of the AMOC, its strength is also continually monitored along 26N with several moorings, east of the Bahamas, in the Middle Atlantic Ridge and south of the Canary islands. This array, know as RAPID, shows a 6 Sv seasonal cycle for the AMOC. In the previous project of the Plan Estatal, the research team demonstrated that the seasonal cycle of the eastern boundary of the NASG, this is, the Canary Current (CC) and the Canary Upwelling Current (CUC), was 1.9 Sv and 3.4Sv, respectively. Using CTD, VMADCP and LADCP data, combined with inverse modelling, we demonstrated that part of this seasonal cycle was due to a recirculation cell in the thermocline water in the easternmost part of the Canary Islands, and to the fall intensification of the poleward flow close to the Africa’s slope. The objective of this project is to determine if the upwelling jet of the Canary Current Upwelling System is responsible for the 1/2 Sv difference between the estimations of the seasonal cycle of the Canary and the Canary Upwelling Currents and the estimations of the AMOC. Moreover, if the transport of the recirculation cell and the upwelling jet is the transport of the seasonal cycle of the AMOC, it will challenge the current paradigm that attributes this seasonal cycle to Rossby waves excited south of the Canary Islands, as already pointed out in the results of our previous project. 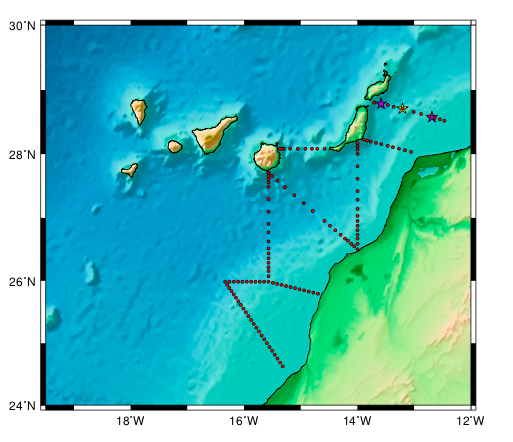